When one of the Gibsonburg Exempted Village schools failed to meet performance goals for one of its subgroups, the ODE required the district to undertake an improvement process. But before the improvement process could get underway, the district had to address persistent problems of inadequate funding and declining student enrollment that threatened its survival. When those challenges had been dealt with, the district turned its focus to improving student outcomes using the Ohio Improvement Process (OIP). 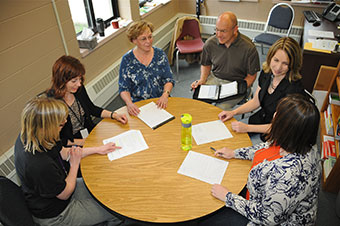 Two interrelated and longstanding conditions posed a survival threat to the Gibsonburg School District. The first issue—one that confronts many small districts—was poor fiscal health and stability. For many years the district relied on deficit spending to operate. The lack of financial resources impeded the district’s ability to implement improvement initiatives.

One of the primary causes of the district’s insolvency was declining enrollment, due in large part to the exodus of high school students pursuing dual credit options by taking classes at nearby community colleges or attending the region’s career-technical school. The district is responsible for paying tuition for students attending these institutions, and, according to the district’s treasurer, this expense depleted “several hundreds of thousands of dollars” from the school’s operating budget.

Gibsonburg tried to balance the budget by reducing spending and increasing earnings, but in 2016 the district’s new administration had to make the difficult choice to lay off seven teachers and one administrator. This action moved the district toward financial stability: 2016 was the first time the district’s books were in the black since 2008. But the lay-offs created a sense of fear among staff and made it necessary to cut several high school courses that had previously been offered. Increasing numbers of students opted to take their classes elsewhere, and district dollars had to be used to pay their tuition. Thus, the personnel cuts that helped Gibsonburg’s bottom line exacerbated its problem of declining enrollment.

Without question, the College Credit Plus (CCP) and vocational school programs provide educational benefits for students and tuition savings for their families. However, having so many high-school students studying off campus changed the culture of the high school. The richness and diversity of the high-school community were diminished without the contributions and energy of the missing students, and many high-school classrooms were under enrolled. The off-campus students themselves regretted having to choose between having the full “high-school experience” and pursuing their coursework elsewhere.

Gibsonburg believed it could keep more of its students at the high school by expanding on-campus CCP course offerings. The district encouraged teachers to become certified to teach CCP courses by promising salary incentives and multi-year assignments teaching CCP courses. The district quickly went from having zero CCP classes in house to 10 in the 2017-18 academic year, with the expectation of offering 20 or more CCP classes the following year. Gibsonburg also arranged to bus students who take courses at the career-technical school back to the high school for their academic classes, thereby generating more money for the district. These strategies brought many students back to the campus, and educators have reported an improvement in the climate and culture at the high school. Moreover, district educators predict that having the better performing students who participate in CCP stay at the high school will improve the district’s accountability test scores. (High school students enrolled for their academic courses at off campus post-secondary schools do not take Ohio accountability tests.)

Besides draining money from Gibsonburg’s budget, the migration of Gibsonburg’s high school students to off-campus educational institutions resulted in other negative consequences for the school and the district.

In an effort to augment revenue, Gibsonburg sought to raise the district’s income tax levy by 0.25%. Although the first effort failed, hampered by unclear language on the ballot, district administrators are optimistic that a second levy effort will prove successful.